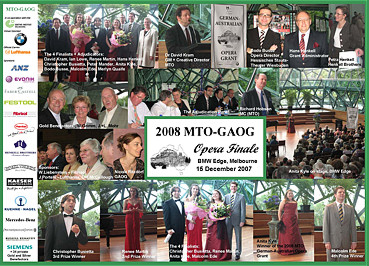 The first prize winner will become part of the professional ensemble at the Hessisches Staatstheater in Wiesbaden from August 2008 until July 2009.
The 1st prize consists of:

The Semi-Finalists
of the 2008 German-Australian Opera Grant


The Semi-Finals will be held on 14 December 2007 at Melba Hall, Melbourne University.
Finals Concert on 15 December 2007, 3.00pm at BMW Edge, Federation Square.

The aim of the grant is to promote emerging Australian opera singers, who are in the development stages of their professional career.