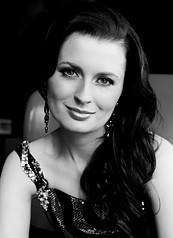 Brisbane born mezzo soprano Victoria Lambourn has been a principal artist with Opera Australia since 2009.  She studied at the Royal Northern College of Music, graduating with a Bachelor of Music (Honours), a Postgraduate Diploma in Performance and a Master of Music in Performance. She has won scholarships from the Peter Moores Foundation and the Australian Music Foundation Awards.

Last year ABC Classics released an EP album featuring Victoria singing opera arias and the Flower Duet from Lakmé, and this year has seen the release of a CD of Percy Grainger works on the Chandos label which includes Victoria singing with the Melbourne Symphony Orchestra.

On 23 November 2013 she received the German-Australian Opera Grant in Melbourne and will depart to Germany in May/June 2014 to become part of the professional ensemble at the Hessisches Staatstheater in Wiesbaden for one year.