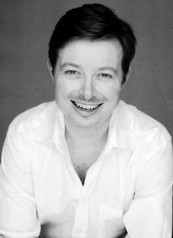 Christopher Rickerby, a 2005 NIDA Acting Graduate and 2010 BMUS VCAM Graduate has been performing professionally since the age of 12 when he made his debut appearance in the musical Scrooge at the Princess Theatre.

Christopher began his classical vocal training in 1988 and has worked with many esteemed teachers and coaches to this present day. Throughout his training he has won numerous classical singing Ei-steddfods including first prizes at the Royal South Street Competitions, Bendigo Eisteddfod (winner of Bendigo Sandhurst Trust), Dandenong Eisteddfod and Geelong Eisteddfod. Whilst in training at the VCA he was awarded the Alice Amy McDonald Scholarship two years running and was also awarded a scholarship from the Friends of The VCA.

For the past five years Opera has been his focus and he is very passionate in pursuing professional endeavours in this field. Opera Australia credits include: A Midsummer Night’s Dream directed by Baz Luhrmann, ensemble for AIDA and ensemble for Die Fledermaus. He is currently performing the role of Robertson Ay in Cameron Mackintosh's Australian premiere of the production Mary Poppins. Christopher Is very excited to be invited to sing with Victorian Opera in their 2013 Gala Concert and the Opera Nixon in China.

In December 2012 he won the MTO German-Australian Opera Grant in Melbourne and went to Germany in May 2013 to become a part of the professional ensemble at the Hessisches Staatstheater in Wiesbaden.